JK & Joel love the Pussycat Dolls, and I really mean love. Well according to Chris anyway, who talked about their, what sounded appalling, interview with them where they tried to cop off with them. Although I don't really know what Chris is having a go at, since all of his interviews with sexy ladies have been some of his worst radio, as he tries to creep around them. Still JK was spectacularly flirty, and even suggested "Sleep with a slightly chubby DJ Day" - which practically confirms that they have been taking interviewing tips from Chris, who at least admitted he was a perv in the end, which is ok. Still - Pussycat Dolls. You would. 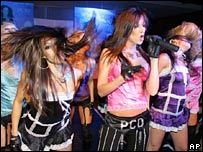 24 hour drinking came into force at midnight last night, as you may well know - in fact some of you may be drunk whilst reading this. If so, well done. Chris was frustrated last night, as he went down to his local and got a mate to try and convince bar staff to let them stay until 12, then they could serve them a pint after the clocked ticked over until the Thursday. Alas, for Chris, it wasn't to be. However, as Dom informed the nation, some pubs did stay open past midnight, by offering soft drinks and "nibbles" to help keep customers interested between 11 and 12. Nice idea. 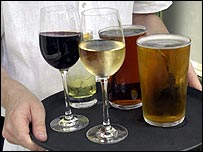 Chris was eager to find out where this "Babylon of 24 hour drinking" was (at this point, Dom again managed to reliably inform the nation there is a pub called "Babylon" in Watford), since nowhere seems to be going the whole hog and going for round the clock drinking - since he can't find a pub that opens after 11. Dave said there was a list in the paper of these pubs, but Chris was annoyed since he didn't know if they were just extended by an hour or just went the whole hog - like his local, which applied to be open until 2, but was only granted a midnight extension, which is a similar story with many alcohol establishments around that area. Heartbreaking isn't it?

The team resolve that the only way to solve this is to go round the pubs and keep going until they find one that is open around the clock. This seems a fair idea to me. Of course the law that Chris is really waiting for is "24 Hour Kebab shops".

T-shirts and merchandise galore from the Little Britain tour, with all the brilliant catchphrases from the tour - and not the poor (in my opinion new series). There is also a beanie hat, which Chris decides to wear. Probably not the best idea though, since Dave and Rachel burst out laughing at how ridiculous it looks on him. Dave says that hats in general don't suit Chris, since his head is too round or something.

Aled soon offered Chris a hug, for reasons which I can't quite remember at the moment. Chris, sadly declined, but offered Dave for the hug instead. Dave also refused initially, he has his manly image to think of, obviously. However Aled persisted and Dave eventually broke…

(*) Dave had a sting ring dream last night. The team were at Glasto, and Sting was playing a set - with the crowd chanting "Sting Ring" all in unison, with Sting himself even saying "Sting Ring" after he finished every song. Sounds infinitely better than the rather crap feature itself.

(*) More Rugby Ticket Giveaway. Highlight of the show…for the winner only. Not anyone else though.

(*) The team played Two Word Tango today, and completed it - with no repeats this time. Dave said it was like copping off with the fit bird at school

(*) A quite long conversation about Kerry out of Atomic Kitten's boobs, Dave is fascinated by them and how big they are - and her Iceland advertising skills.

Chaka Khan I Feel For You - Chaka Khan shares the same surname as Genghis Khan, who was an ancient war lord from Mongolia, who rode horses - Horses like to eat sugar lumps - Sugar lumps are added to tea and coffee to make it more sweet - Sweet had a number one chart topper in 1973 with "Blockbuster" - "Blockbuster" is a term referring to films - Films of a different type are what you put in your camera - Camara first name Henri plays for Wigan Athletic, and scored against Arsenal on Saturday - "Saturday Night" was a big hit in 1994 for Whigfield - Whigfield once had a run in with Scott Mills at a gig in Lincoln - Lincoln has a nice cathedral, as does Peterborough - Peterborough Football Club are nicknamed "Posh" - "Posh" is also the nickname of Victoria Beckham, who's the wife of footballer David Beckham - David Beckham has got lots of tattoos, which he gets done by his favourite tattooist, who's job is to "tattoo you" - and "Tattoo You" was the title of a 1981 album from the Rolling Stones, which features the classic track "Start Me Up" - Which links us to todays Tedious Link offering, The Rolling Stones and Start Me Up

Sadly, No Mini-Moyles update today. The team must have been too busy packing for New York City.

<a href="http://chris.polymathic.net/phpBB2/viewtopic.php?t=10827">>Thursday 24th November- What did you think of this show/review. Post your comments here<</a>

It wasn't great but as it seems likely to be the […]

Having gone back to my old show run through which […]

Hello I'm trying to get hands on Chris Moyles int[…]