Those of you of a certain age will have surely watched one of the best documentaries of the year (probably even best of the century), when Take That reformed to give a “warts and all” account of their time in the band. Chris certainly did, and managed to point out how camp Jason Orange is nowadays, which I’m sure he wasn’t when he was actually in the band (although getting it on with Lulu* would turn anyone gay) *allegedly

Chris also revealed that there is a supposedly brilliant connection between last nights show and the Chris Moyles show, although sadly he wouldn’t say what it was, although rumour has it on the message board that former producer Will or the bodyguards hold the key to unlocking this mighty secret. What it actually is though, we may never know. But we know for sure that it isn’t the fact that Robbie was on the show last week – that is way too obvious.

Sadly George missed out on this “must see” show, and she was gutted. Chris started to describe the show to her, but was annoyed at how the show missed out massive chunks of information – such as the downsizing the story of Robbie going to Glasto, which was a huge story. George was especially gutted she missed it as she was at the press conference when the band split up, which was naturally an emotional time for not only her, but all involved. Not only that, but her first ever appearance on Radio 1 involved Take That as well, as she won a competition on Simon Bates’s show to interview the band themselves. Unfortunately that itself isn’t the connection either, but Chris is determined to find the tape of this and play it on air.

Take That are on Colin & Edith tomorrow as well, although Chris is a bit peeved about this as they should have come on the breakfast show instead. He said he wouldn’t turn them down though if they decided to do his show as well – it could be ‘Take That Day’ on Radio 1. Let’s face it there have been worse themed days.

Dave Drops One…or does he? 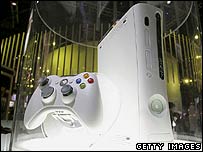 Naturally Chris couldn’t wait to see it, so Aled passed it round the studio via Dave. Dave, being the clumsy oaf that he is dropped it. On the floor. And it broke. Since Chris was the only person in the UK to own one of these at this point, to say he was annoyed is an understatement – you could literally feel his restrain from swearing on the air (and I presume when they went to a record the air went blue). Chris said he wasn’t speaking to Dave for the rest of the show, and it seemed genuine as well.

However, all was well a few moments later, as Dave revealed to his great mate that it was little more than a fake xbox that he had dropped – and they had a real one upstairs for him. Those crazy pranksters.

Other Stuff on Today’s Show

(*) George is missing Scott – that’s what she claims anyway, Chris thinks she is just saying that as she feels that she has to. George can come in as well as Dom – so she can have a rest from Chappers.

(*)More Sting Ring. Today someone said hello a couple of times then hung up. Erm, just like every day then.

(*) Another Rugby ticket giveaway. Brilliant Connor won. End of. And another great comp for the chart show live as well. You lucky people.

(*) Girls Aloud were singing on GM:tv today – Chris pointed out they weren’t singing live and they were about half a second behind miming. Still, Fit as…so who cares.

U2 One - One is the shirt number worn by England goalkeeper Paul Robinson - “Paul Robinson” is also the name of the long running Neighbours character played by actor Stefan Dennis - Stefan Dennis shares the same surname as Les Dennis, who used to host “Family Fortunes”, which is rumoured to be returning in a celebrity form, with Vernon Kay - Vernon Kay is married to Tess Daly, who does “Strictly Come Dancing” with Bruce Forsyth - Bruce Forsyth shares the same initials as Ben Fogle, who did some castaway on a Scottish island thing, and ended up going out with that Vanessa bird who was on Big Brother a couple of years ago, and is from South Africa - South Africa is the home nation of Nelson Mandela - Nelson Mandela has spent time in prison, and in that respect shares something in common with Duncan Ferguson - Duncan Ferguson wears the coveted Everton number 9 shirt - 9 minus 2 is 7 - “Seven And The Ragged Tiger” was the title of a 1983 album by Duran Duran - and track 1 on said album was the 80’s classic “The Reflex” - Which links us predictably to a classic bit of Tedious Link action, in the form of Duran Duran and The Reflex

Chris is going home to write a lot of jingles for New York. Then he might sample his new X-Box 360.

Dave will be doing some vague jobs, then watching the new series of Little Britain. Aled hopes to play X-Box 360 with Chris if he lets him. Joce will be celebrating her sisters promotion. Rachel will be doing the worlds hardest pub quiz. Carrie will be dancing to her Madonna CD. George will be wandering aimlessly around Top Shop.

<a href="http://chrismoyles.co.uk/phpBB2/viewtopic.php?t=10773">>Thursday 18th November– What did you think of this show/review. Post your comments here<</a>

It wasn't great but as it seems likely to be the […]

Having gone back to my old show run through which […]

Hello I'm trying to get hands on Chris Moyles int[…]