It's summery and very warm today, so Chris has finally given in to temptation and worn shorts - that's right no word of a lie, actual shorts. If you found that shocking (which I would assume is the majority of you) then you better take a seat before reading that he was also wearing a nice linen shirt with two buttons UNDONE. The heat really does make people do some crazy things. He's also got a pair of sandals on to help combat the heat, which Carrie helpfully christened "Man-dals". Dave says that Chris is going to "look a right arse" if it rains in all that summery gear, but with expensive sandals on, I don't think he has to wait for any rain.

Moon Balloons and Aled's 24 Guess Who

Chris and Dave both got a weird text from Chris's brother last night, which they just couldn't understand…apparently because he's a bit like Derek from Big Brother (but not in that way, obviously). It said "Don't forget to look at the moon tonight, a balloon go under the evening sky" or words to that effect. Safe to say that's a bit confusing. Dave thought that the phone sending the message must have been stuck on predictive text and the message should have been entirely different, but that wasn't the case. Dave also thought it was from a poet, when Chris revealed to was paraphrased from EE Cumming - although Dom found out he also supplies diesel engines on the internet. That doesn't explain what the message means though, so Chris naturally went and had a look at the moon, but to no avail. 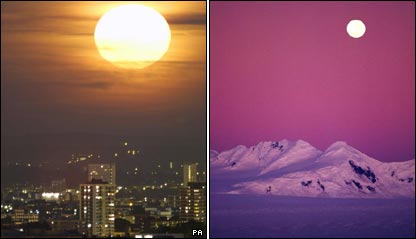 Dom helpfully revealed that the message may have been because the moon is closer to us now than it has been for 19 years and looks bigger - of course it isn't actually bigger, it's just an optical illusion due to the fact that its so close. But what about the bloody balloon part? I guess we'll never know now. Chris did say that whenever he looked at the moon, all he could ever see was the face of a man in it (uninterestingly, so can I). Dave can't though, but he can see a face in his Gran's curtains. Not as weird as it may sound, because the curtains in question did have a fair few patterns on them and when you are a kid they can merge into all sorts of wild and wonderful things. The problem is though, as Dave found out, that once you see a face in something, you see it every time without fail and cannot get it out of your head. This particularly affected Dom, who had Margaret Thatcher in his spare room

Aled was in a bit earlier today, he thought he was going to have a nice chat about Big Brother and Glastonbury, but it was all a massive rouse to get him in to have an extra special game of "guess who", which many regular listeners will know, Aled is rrrrrrrubish at when on his own, especially when the "who" in question is a guest in the studio. So after a long, and logical, game from Aled, it was finally revealed it was Carlos Bernard, aka Tony from 24

He's in town to promote the season finale of 24 which is on Sky One this Sunday, (I won't be watching, I haven't even finished the first season on DVD yet, but if the latest one is anything like that, then worth tuning in), so naturally it was all the team could do to interview him as well. The interview itself was interesting enough, although I feel at least a basic knowledge of the show was necessary to get the most out of it. The team probably found it most interesting, with Tedious Link a whopping 7 minutes late - Aled's input I suspect was a major factor in making it interesting, with his stories of filming the show - his presence on air always gives the show that extra something. They also rang up Davina as she loves 24 and text Moyles about 24 times during the interview, such was her excitement. Some people will do anything to get on National Radio 1.

(*)Great retrospective quote from Chris (I'm writing this listening back on a Saturday) about Glastonbury…
Dave: It's hot today, but the problem is tomorrow when we go to Glastonbury, it's going to pee it down with rain
Chris: I don't still don't believe that
There was also pleanty of Glasto chat talking about how they are looking forward to it and the line-up etc. Chris doesn't want to talk to any hippy dwarves though.

(*) Dave was a fat baby - unlike Bizarre who is just a fat person and not a rockstar.

(*) The team have a challenge to get on the stage at some point during the weekend. Chris thinks it'll be more funny to send Joce on her own.

(*) More from "Carrie on Camping" (PUN!!!) with a repeat of yesterdays and a new one today. Oh the excitement.

(*)Aled does his moonwalk - he can carry on doing his MJ tour now the court case is over.

(*)Aled inflicts Tomkraft onto the whole nation - even though 2pac was ready to play. Some of us never recovered from that.

Groove Armada - 'Superstylin' - Grove Armada are one of the few live dance acts to include a trombone - trombone is a brass instrument that uses a slide - "Slide away" is an Oasis classic, released from the Definatly Maybe album released in 1994 - 1994 was when the World Cup was hosted by the USA - The USA is a country that uses the presidential form of leadership - Presedents of the USA were also a band, who had a top 8 hit with "Peaches" - Peaches are sold in tins - Tins, as the name suggests, are made from the metal tin which is traditionally mined in Cornwall - Cornwall is a nice place to go on holiday as is Majorca - Majorca has just been put on the music map as the home of DJ Sammy - DJ Sammy's current offering is a musical reinterpretation of Annie Lenox's "Why" - Why (y) can also be a letter in the English language like a,b or c - C can be the first letter of the name of many of the bands we know and love such as Chicago or even The Charlatons, which links us to The Charlatans - 'Love is the Key'

<a href="http://chris.polymathic.net/phpBB2/viewtopic.php?t=9655">>Thursday 23rd June- What did you think of this show/review. Post your comments here<</a>